Jalpa has been with ASI since 2008 and was Director of the Governance Practice prior to her appointment as Interim CEO in November 2020. She has designed and overseen some of ASI’s most innovative and complex governance programmes globally, in Africa, Asia and the Middle East.

Prior to joining ASI, Jalpa worked with the World Bank in Afghanistan on public administration reform, and at the Department for International Development. Jalpa graduated with an MA in Political Development from the University of Manchester.

Ben joined ASI in 2007 after working as a consultant on programmes in Africa and the Middle East. He was soon charged with managing some of our most complex and challenging projects. He has extensive experience working in fragile contexts and previously directed our South Asia Practice. Since 2019 he has overseen ASI’s entire project portfolio as Director of Programmes.

Ben has a law degree from Cambridge University and an MSc in public policy & management from SOAS.

Having joined ASI in 2003, James has been a driving force behind our systems development and financial control framework for approaching two decades and has shaped our global finance functions.
As a Chartered Global Management Accountant, today he is responsible for the financial accounting, statutory compliance, and adherence to industry best practice for our corporate and project activities.

Ally leads our People, Talent, Legal and Ethics team, whilst also providing oversight and strategic inputs to some of our programmes.
Building on an early career in the UK Government, Ally spent over a decade supporting governments to implement wide-ranging reforms, from setting up centre of government delivery units and pandemic response infrastructure, to expanding access to quality education, energy and water. Ally has a degree in Philosophy, Politics and Economics from Oxford University and an MSc in Economics from Birkbeck, University of London.

Warren Turner, Director Asia-Pacific
Warren leads ASI’s engagement in the Asia Pacific region. For more than 20 years, Warren has worked with governments, donors, civil society and the private sector. Prior to joining ASI in 2018, Warren worked at the Asian Development Bank, and previously for the (then) Australian Agency for International Development. He has performed technical lead, team leader and management roles spanning many countries across Asia and the Pacific and has a technical focus in economic governance. Warren also worked for several years in international banking and finance.

Izza Farrakh, Head of Pakistan
Izza joined ASI as a consultant in 2013, and has almost twenty years of experience working with consulting firms, I-NGOs and multilateral institutions on public sector reform. She has managed several complex reform programmes, and has a particular interest in the education sector.

Matt Uzzell, Director – Infrastructure, Climate and Extractives
Matt’s work is focused across infrastructure, private sector development and climate change in developed, developing and post conflict countries. He has been with ASI for over twenty years and has directed many of ASI’s largest and most complex regional programmes across Africa and Asia for the UK government, World Bank and other donors. Matt is skilled at directing large multi-location, multi-sector adaptive management programmes with a particular focus on resilient, sustainable and appropriate infrastructure solutions. He is passionate about maximising impact, building resilience and achieving sustainable inclusive growth.

Zane Kanderian, Director – North America
Zane leads our USAID-funded activities and business development efforts. Zane has worked with ASI since 2006, over which time he has managed projects in Georgia, Iraq, Afghanistan, Egypt, Morocco, Jordan, Syria, Libya, Tunisia, Yemen, Brazil and Laos and in a diversity of technical areas from civil service reform and public financial management to renewable energies and entrepreneurship development. His particular area of interest is in political reform in the Middle East and North Africa, where he managed ASI programming from 2011 to 2017.

Nichola Crail, Head of Internal Audit
Nichola, (Nicki) joined ASI as Head of Internal Audit in 2017, becoming our Head of Audit and Investigations in 2021. A qualified accountant, Nicki is a career risk and assurance professional, working in the humanitarian and international development sectors for the last 10 years, having spent 5 years at Save the Children UK and International. She has travelled extensively, completing audits and investigations in Africa, the Middle East, the Americas, Asia, South Asia and Asia Pacific. Prior to moving ‘in-house’, Nicki worked as a Director at Grant Thornton leading it’s UK Midlands risk assurance not-for-profit team and working as the Transformation Director (Senior Civil Servant Grade) of the Risk Assurance Division at the Department for Work and Pensions. Nicki, who started her career with the Audit Commissions, is a Historical Studies graduate from Sheffield Hallam University.

Myles Bush, Director
Myles is focused on projects that support reform of rule of law and security institutions, countering violent extremism and terrorism, and strategic communications. Myles joined ASI in 2002 and has delivered complex projects in the Middle East, Africa, and Afghanistan on behalf of several departments of the UK government, the European Union and other donors.

Gareth O’Hagan, Regional Director – Africa
Gareth joined ASI in 2012, and has been based in our Africa regional office in Nairobi since 2016, having previously held the role of Head of Extractive Industries Governance. Gareth has over 20 years of development and private sector experience with industry-leading organisations, and is skilled at managing complex programmes to deliver impactful results. His career has spanned many countries in Africa, Asia, Europe and North America.

Morgan Rothwell, Head of Business Development
Morgan has been with ASI since 2015 and was the Private Sector Development Coordinator prior to his appointment as Head of Business Development in 2017. He has worked to secure some of ASI’s most interesting projects for a range of donors across Africa, Asia and the Middle East. He currently heads ASI’s India office in Delhi. Prior to joining ASI, Morgan worked at PwC where he managed programmes in the private sector and for the Department for International Development. Morgan is a Political Science graduate with an MA from the University of Bath, SciencesPo Paris and Charles University Prague and a BA from McGill University.

Karim Megarbane, Head of EU
Karim oversees all of ASI’s EU- and EU Member States-funded project activities and business development efforts. Since joining the company in 2016, he helped build a significant EU project portfolio as well as internal capacities to deliver these contracts. In 2017, he led the creation of Adam Smith Europe, the Group’s Amsterdam-based subsidiary, of which he is a director. Prior to joining ASI, Karim designed post-conflict stabilisation programmes in central Africa at Expertise France, and managed multiple public administration reform programmes in the MENA region on behalf of the French Prime Minister’s international development unit. Karim holds an MA in Development Economics from the University of Manchester and a BA in Political Science from the University of Montreal.

Attracting the right people to work with us, and supporting their performance, development, and well-being is a critical factor in ASI’s success and our impact in the countries where we work. Our culture champions diversity and inclusion and we live by our values. 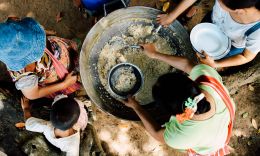 Want to be a part of ASI?